Damen: upgrade ‘Stena Don’ is a sign of recovery offshore

Damen Verolme Rotterdam (DVR) has been commissioned by Stena Drilling to perform an upgrade of the semi-submersible drilling rig ‘Stena Don’.
The colossal rig (96 by 67 metres) needs to be fitted with an eight-point mooring system and the hull requires reinforcement to comply with stricter safety legislation. The extensive project will expectedly take about three months. The ‘ 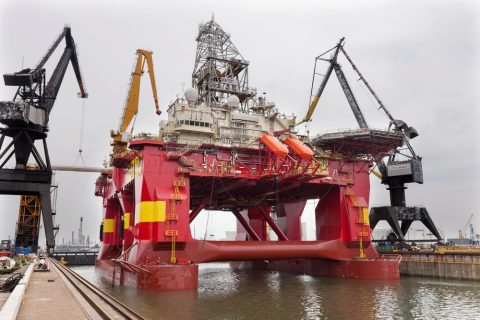 Stena Don’ is scheduled to arrive in Rotterdam in October.
Commercial director Bas Loohuis is mainly pleased with the project because it serves as conformation that the oil and gas market is recovering again: ‘The North Sea seems to be one of the first areas where there is light at the end of tunnel again’.

Part of the work is carried out by other divisions of the Damen group, such as the anchor chain blisters and sponsons, for example. These are currently being manufactured at Damen Shipyards Mangalia in Romania, which was acquired from South Korean Daewoo at the end of last year. Those eight units weigh about 25 tonnes each.
Incidentally, this is the fourth time that DVR is overhauling the seventeen-year-old drilling rig. As recently as three years ago, the ‘Stena Don’ underwent large-scale periodic maintenance and a ‘midlife upgrade’.
The installation of the eight-point mooring system is to ensure that the ‘Stena Don’ is able to operate in more diverse water depths and in more severe weather conditions. Furthermore, the fact that the dynamic positioning system no longer needs to be continuously used results in fuel savings.

Offshore is an important part of the Project Cargo Summit.