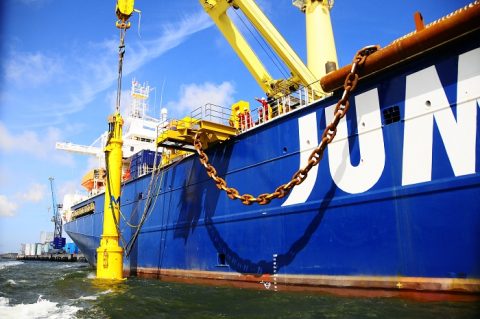 Market ‘ideally’ positioned for further mergers and acquisitions
After years of cut-throat competition from bulk carriers and container vessels, the future is looking optimistic again for the project cargo fleet. Not only is the market growing, but the market share of the specialised fleet is increasing as well. This according to Susan Oatway, principal consultant for the multi-purpose and heavy lift fleet at Drewry.

The multi-purpose and heavy lift fleet has been through a rough couple of years that were characterised by bankruptcies and reorganisations. Has that now come to an end?
‘Yes, for the last nine months or so our predictions have been cautiously optimistic. The economy has been good for a while now and, as is the case for many other shipping segments, the market is definitely picking up again for the multi-purpose fleet. We expect an average annual growth of 2% and the stake of the specialised fleet is set to increase, although the nature of the cargo makes it is difficult to give exact figures. No one labels their cargo as project cargo on the consignment note.’

We have witnessed many major bankruptcies and mergers and acquisitions in the past two or three years. The market however still seems fragmented. What kind of impact does that have?
‘That is correct, the 20 largest shipping lines in this market combined only control 20% of the number of ships and 35% of the total loading capacity. The segment of smaller vessels with loading equipment up to a maximum of 100 tonnes in particular is still highly fragmented. Those ships are fighting for cargo.
So far, the consolidation in the market has significantly impacted the owners involved, but not yet the fleet. The joint venture between Jumbo and BBC and the merger of Zeaborn and Rickmers Line offers them economies of scale and enables them to expand their service provision, but the companies are not seizing the mergers and acquisitions to consolidate their fleet. Because old ships are not being demolished, the average age of the fleet is now 16 years. In order to truly improve the market, the issue of overcapacity needs to be addressed. The introduction in 2020 of the sulphur cap may help with this.’

Do you expect further mergers and acquisitions?
‘We will undoubtedly see more mergers. The market is ideally positioned for further consolidation among the owners.’

In earlier reports, you mentioned the fierce competition from bulk and container shipping. Has this battle for cargo subsided now that these segments have also started to perform better again?
‘Yes, in recent years container carriers very aggressively pursued project cargo and breakbulk. The better price made the difficult stowage worthwhile. Cargo that was containerised in those years will not come back again, but the extent to which this type of cargo is being containerised has diminished. Bulk carriers experienced growth in the transport of ores and coals in the first half of the year and the grain market is picking up again. As a result, they too are less aggressively pursuing different cargo types. There will always be competition from these segments, but it is less fierce than before.’

How has the fleet developed in recent years? Are there any obvious changes?
‘There is a reduction in the number of more basic ships, the smaller vessels with a crane capacity of up to 100 tonnes. Up to and including May of this year, 18 ships of this type were demolished. In the last five years, shipping lines have been investing more in heavy lift vessels. The ships are not necessarily growing larger – most of them still have a payload of between ten or twenty thousand tonnes – but they have an increased crane capacity of at least 250 tonnes. The average crane capacity of the heavy lift fleet is now approximately 400 tonnes. The advantage of these more specialised ships is that it enables the sector to better position itself amidst other sectors such as container shipping and bulk shipping.’

Looking ahead, what is the outlook for the sector in the medium term and which markets are driving the aforementioned growth?
‘The prognoses are positive, although overcapacity still poses a risk. The increase in oil prices is good for the market, because it leads to new investments and that is what these shipping lines need. The renewable energy market is doing well, as is construction; mining could still improve somewhat. The improvements are clearly noticeable, but the pace at which the market is picking up is slow. It simply takes a few years for new investments to result in additional sea freight.’

Susan Oatway is one of the many speakers during the Project Cargo Summit on the 12th & 13th of September. Check our website for the full program and registration.