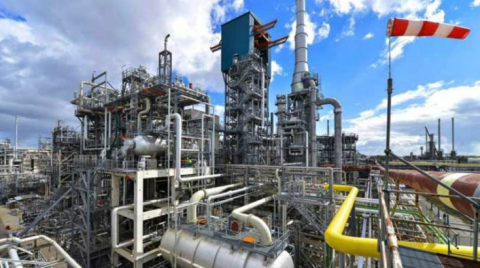 Shell has an ambitious investment agenda for its refinery in Pernis. The construction of a Solvent Deasphalter (SDA) makes it possible to remove heavier fractions from petroleum oil, allowing for a larger quantity of the oil to be processed into lighter, high-quality products. Before this innovative unit becomes fully operational later in the year, the gigantic installations however had to first be placed in location. A project perfectly suited to Rotterdam’s heavy lift and breakbulk cluster.

As the largest integrated refinery complex in Europe, Shell Pernis occupies a key position in the European market. ‘The most important thing about this substantial investment in the SDA unit is our ability to produce more clean products from a barrel of oil’, says Jos van Winsen, general manager at Shell Pernis. ‘By removing asphalt from a flow of petroleum products, more lighter, high-quality products such as petrol and diesel can be produced in different plants. This increases the flexibility of the refinery while at the same time reducing the environmental impact of the product portfolio.’

Apartment building
‘Rotterdam was an obvious choice in that respect’, adds Arthur de Leeuw, commissioning & start-up manager of the SDA project Shell Pernis. ‘Amongst other reasons because of the excellent logistical connections that are available, both by water and by land.’ And these connections did prove extremely useful: the SDA consists of ten modules, each the size of a decent-sized apartment building, which were transported to Rotterdam by sea.

Stability
‘Including all preparations, we spent more than a year and half on that transport’, reflects Leon van Veenendaal, operations manager at Agility Project Logistics. ‘A challenging project, especially in terms of stability.  Measuring thirty metres in height, 35 metres in length and fourteen metres in width, the units are very high and narrow. Thanks to the good cooperation within Rotterdam’s heavy lift and breakbulk cluster, the project however was executed flawlessly.’

Mentality
Rolldock arranged the transport by ship, Mammoet from Schiedam took care of the last segment by road and Agility handled the overall coordination. ‘This project has made apparent just what a fantastic breakbulk port Rotterdam actually is’, says Van Veenendaal. ‘Not only are the quays suitable and is all the necessary knowledge and equipment available, but you simply cannot help but notice that the mentality here is fully geared to successfully completing these kinds of mega projects. I am truly proud of the collaboration and the result.’

Learn more about hinterland connections and multimodal transport at the Project Cargo Summit.