Siemens Gamesa expects a rapid rise in the global offshore wind market to grow at an average rate of 11% and reach 15GW in installations per year in 2030. Last year 4.3GW was installed, according to figures by the Global Wind Energy Council (GWEC). 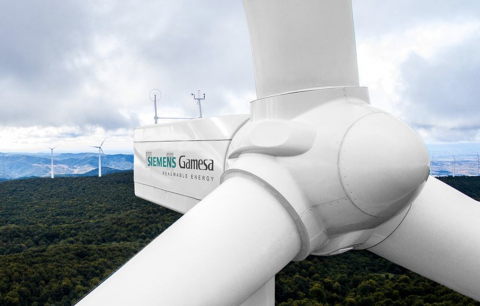 ‘The dominance will still remain in Europe’, said CEO Andreas Nauen of Siemens Gamesa at a panel on offshore wind during the conference of the American Wind Energy Association in Chicago. ‘Europe will still be the biggest market, simply because you have the best wind conditions and also the infrastructure there.’

In 2017 Europe had its best year ever in installing wind energy. GWEC wrote that earlier this year in its annual market statistics. Worldwide the offshore sector was having a record year. ‘Offshore installations of more than 3,000 MW are a harbinger of things to come.’

‘Most competitively priced’
‘The numbers show a maturing industry, in transition to a market-based system, competing successfully with heavily subsidized incumbent technologies’, said Steve Sawyer, GWEC Secretary General, in February presenting the Global Wind Statistics 2017. ‘The transition to fully commercial market-based operation has left policy gaps in some countries, and the global 2017 numbers reflect that, as will installations in 2018.’

‘Wind is the most competitively priced technology in many if not most markets; and the emergence of wind/solar hybrids, more sophisticated grid management and increasingly affordable storage begin to paint a picture of what a fully commercial fossil-free power sector will look like.’

Smaller profit margins
About the ‘cratering prices’ for both onshore and offshore wind GWEC published: ‘Markets in such diverse locations as Morocco, India, Mexico and Canada range in the area of $US 0.03/kWh, with a recent Mexican tender coming in with prices below $US 0.02. Meanwhile, offshore wind had its first ‘subsidy-free’ tender in Germany this year, with tenders for more than 1 GW of new offshore capacity receiving no more than the wholesale price of electricity.’

‘The dramatic price drops for wind technology has put a big squeeze on the profits up and down the whole supply chain’, concluded Sawyer. ‘But we’re fulfilling our promise to provide the largest quantity of carbon-free electricity at the lowest price. Smaller profit margins are a small price to pay for leading the energy revolution.’

Offshore wind is a growing market for the heavy lift industry. Future developments and prospects in this market will be discussed during the first day of Project Cargo Summit.