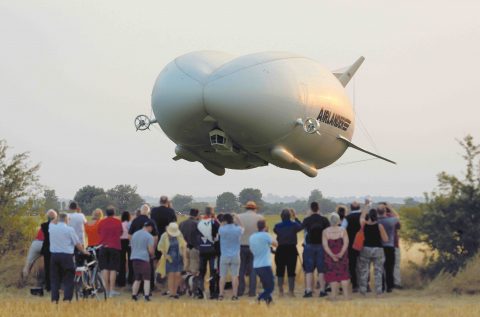 There have been many designs, promises and developments in the field of airships for heavyweight transport jobs, yet companies such as Hybrid Air, Lockheed-Martin/Aviation Capital, CargoLifter and Aeroscraft have yet to deliver the goods. This year will see no change in that.

The British Airlander-10, lovingly nicknamed ‘the giant bum’ is the closest thing so far to a commercially deployable cargo zeppelin. Despite the dent to its reputation when the prototype crashed upon landing in front of BBC cameras in August last year, the British owner of the Airlander, Hybrid Air Vehicles (HAV) is not discouraged and this month announced a share issue. The airship pioneer aims to collect fifty million pounds (58 million euros) by the end of this year or early 2018. The financing is necessary in order to establish a production line for the Airlander-10, whose length of 92 metres still earns it the title of the largest airship to have actually flown since the demise of the colossal zeppelins of the 1930s.
HAV plans to issue shares on the London Alternative Investment Market. The company is also undertaking debt refinancing, which must bring in a further thirty million pounds. Last year, the zeppelin builder also amassed two million pounds via crowd funding, leading analysts to currently estimate the value of the airship manufacturer to be around 55 million pounds. Other investors in the British project include aviation enthusiast Bruce Dickinson of the Iron Maiden band. Hybrid Air also receives a subsidy from the EU development fund, Horizon 2020.

Takeover
Besides the share issue, Hybrid Aviation is not ruling out the possibility of a takeover by one of the large aviation industry players such as Boeing or Airbus, in the somewhat longer term. HAV has apparently already been approached by parties, but is not naming names at this point. An alternative to such a takeover could be a merger, in order to provide the company with sufficient capital for a ten-year period.
HAV, which is a follow-on from the SkyCat company, began developing the airship together with the US aviation constructor Northrop Grumman in 2007, for surveillance tasks for the US military. It makes use of non-flammable helium. The US withdrew from the military project in 2013, as a result of cost-cutting measures. The British continued to develop a civil aviation variant, whose prototype had a cargo capacity of ten tonnes and a length of 92 metres. This makes the colossus eight metres longer than the world’s largest cargo plane, the Ukrainian Antonov 225.
The first successful test flight of the Airlander-10 was completed mid-2016, but a second flight in Great Britain in August was less successful, after two hours of being airbourne. The airship hit the ground upon landing. While no one was hurt, there was considerable damage to the bottom of the 25 million pound airship, including the cockpit. The crash resulted in a considerable delay in the airship testing programme, requiring complete replacement of the cockpit, for example. According to insiders, the builders hope to restart the test flights this spring, though all will depend on a number of ‘rigourous checks’ of, for example, the engines which enable vertical takeoff and landing. Only then will the airship take to the skies again.

China
It is therefore still unclear when the first Airlander-10 will be put on the market. The company itself claims that there is ‘great demand’ for their smaller cargo zeppelin, which can transport cargo at a maximum speed of 140 kilometres per hour, for large infrastructure construction projects in China, among other countries.
There is apparently also great interest from countries such as the US, Brazil and the Middle Eastern states, but also from Sweden. It is particularly useful in regions and countries with limited infrastructure, where the Airlander can be deployed as an enhanced crane, as it were, for transport of outsized cargo over great distances. An example given is that of transport of the large propellers for wind turbines to remote areas of northern Scandinavia.

Ten per year
The British manufacturer has already indicated its desire to produce ten Airlander-10s per year from 2021 on.
Alongside the 92-meter-long Airlander-10, the company is also developing the larger Airlander-50. This colossal cargo zeppelin with a cargo capacity of fifty tons would be suitable for use on transatlantic air cargo routes, where it would become the main competitor of the cargo jumbos. The prototype of the Airlander-10’s big brother (120 metres long, 35 metres high and 60 metres wide) is due for completion in three years’ time. In terms of capacity and dimensions, the Airlander-50 comes close to that of the American Aeroscraft, which will have a 66 ton capacity and a range of thousands of kilometres at a cruising speed of 200 kilometres per hour. The great advantage of the Aeroscraft, like the Airlander, is that it does not require an airport, while also being extremely economical, fuel wise. While a smaller prototype of the Aeroscraft, known as the ‘Dragons Dream’, was built in 2013, components for the larger version are still under development. NASA has provided 35 million dollars for the construction of the first large airship.

Innovation is crucial for heavy lift and project cargo companies to survive in a competitive market. How do we make operations faster, safer and better? Tech trends is one of the topics of the Project Cargo Summit conference.