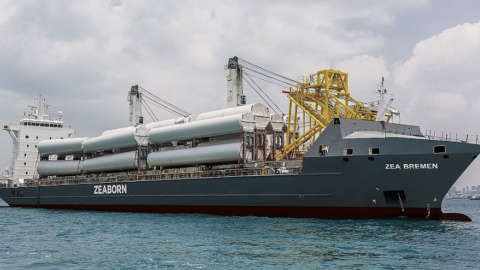 The latter now manages the second-largest fleet of multipurpose vessels in the world. The total fleet of the new company comprises more than 150 container ships, bulk carriers and multipurpose vessels and has almost 5,000 employees. Three hundred staff members work at two offices in Hamburg and Singapore, while the remaining 4,550 employees are active at sea.

Management board
The new subsidiary of the Zeaborn Group is headed by board members of the former companies Rickmers Shipmanagement and E.R. Schiffahrt and consists of CEOs Nils Aden and Holger Strack, COO Michael Brandhoff, CFO Erik Kruse and Managing Director Isabelle Rickmers.

‘With this, we are also pleased to signal to the market the successful integration of E.R. Schiffahrt and Rickmers Shipmanagement’, say managing partners Ove Meyer and Jan-Hendrik Többe of the Zeaborn Group. ‘Two well-known and experienced companies have now joined forces and our customers can immediately benefit from greater flexibility and reliability as well as interesting economies of scale, for example in terms of purchasing. At the same time, a course aimed at dynamic growth is being pursued.’

Rapid growth
The Zeaborn Group is one of the fastest growing shipping lines in the world. It was founded by German entrepreneur Kurt Zech and managing partners Ove Meyer and Jan-Hendrik Többe in 2013. The three wanted to take advantage of the harsh market conditions in the shipping industry to relatively cheaply build a fleet of multipurpose and heavy lift vessels. The company for example managed to achieve growth through the acquisition of the ailing Rickmers-Linie.

Shortly after acquiring a 50-percent stake in EMS Conbulk and initiating a partnership with Carisbrooke Shipping, the company proudly announced that it managed a fleet of 34 vessels. Since then, Zeaborn has acquired Rickmers-Linie, NPC Projects, MCC and E.R. Schiffahrt; it has also started a joint venture together with Intermarine named Zeamarine, with which it aims to manage more than 100 ships by the end of the year.

Want to know more about the latest wave of consolidations in the project cargo industry? Visit the Project Cargo Summit on the 12th and 13th of September; Drewry analyst Susan Oatway will give a presentation on the latest market developments and commercial manager Benjamin Joithe of Rickmers/Zeaborn will tell you first-hand how the wave of consolidations and current political tensions impact project cargo shipping.