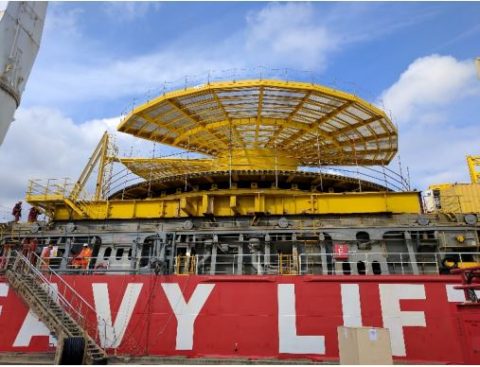 Hansa Heavy Lift has transported a giant carousel together with eight reels, weighing a total of 3,508 metric tonnes, from Newcastle to Lagos in Nigeria. It was destined for the Egina Oil Field.

The voyage took place on board of the super heavy lift vessel HHL Lagos, which was mobilised in Rotterdam to prepare the vessel with additional deck strength for the extra large carousel, which weighed over 2,200 metric tonnes including spooled product and had a diameter of over 25 metres.

Calculations
‘Close connection between the Hansa Heavy Lift engineering, superintendents and the vessels crew allowed for a fast deck reinforcement through the installation of additional underdeck stiffeners and a spooling platform’, said Project Engineer Tom Kröger.
‘Our in-house team of experienced naval architects carried out structural calculations to assess the structural integrity of the vessel. The team performed structural analyses to develop a tailor-made solution accordingly with the project related requirements and designed and installed bespoke shim-plates on deck to support Saipem with the accommodation of the carousel.’

Double banking
In cooperation with Hansa Heavy Lift, Saipem installed the empty carousel, together with the required equipment, on the vessel before sailing to Newcastle, where the cargo spooling took place.
The Hansa Heavy Lift team worked with Saipem upon arrival at the port of Lagos to achieve double banking with Saipem offshore construction vessel Normand Maximus to unspool the products from the carousel.