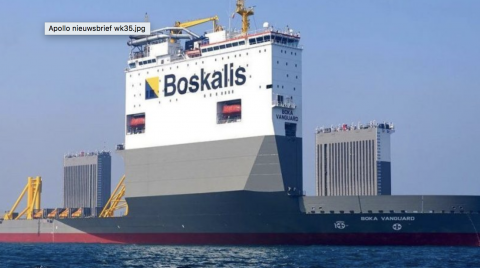 In the coming year, maritime contractor Boskalis will terminate a substantial part of its loss-making heavy cargo fleet.

The Papendrecht-based group announced this on Thursday morning on the publication of its half-year results. Following a one-off charge of 397 million euros by Boskalis, mainly related to goodwill and vessels, the net operating profit of 34.5 million euros for the first half of the year changed to a net loss of 361 million euros. Investors were fazed by these results; at the end of Thursday morning, the share price had dropped almost 8% below Wednesday’s closing price.

In a note to the figures, Boskalis states that the Offshore Energy division, which includes heavy cargo transport, is exiting the ‘low end’ of the market: ‘The transport activities at the low end of the market have deteriorated further and are now generating substantial losses.’ According to Boskalis, this segment is increasingly becoming a ‘commodity transport market that suffers from overcapacity and does not fit in with a positioning higher up in the transport and installation market’.

Demolition
The half-yearly results do not make clear how many ships will be divested and how much of the write-off of nearly 400 million euros is related to this. What is clear though is that by far the largest part of the fleet must be involved. It is also not clear whether the ships will be sold on the second-hand market or scrapped. Given the reference to overcapacity in the market, demolishing some of the vessels seems logical.

Boskalis’ position in the market for the transport of (extremely) heavy cargo is mainly related to the acquisition of Dockwise more than five years ago. Dockwise operated a fleet of more than twenty ships, many of which were already quite old at that time. These will now probably be divested. Last year, the heavy cargo fleet however still achieved an occupancy rate of 73%.

That percentage was substantially boosted by the latest generation of ships (types 0 and 1), of which the ‘Vanguard’ (formerly ‘Dockwise Vanguard’) with its lifting capacity of 117,000 tonnes is the flagship. This class of ships achieved an occupancy rate of almost 100%.

Future
In its outlook, Boskalis now says that the profit for this year will be lower than last year, when CEO Peter Berdowksi still stated that matching the profit for 2017 would be ‘a challenge’. The ‘adjusted’ profit of 34 million euros is less than half of the 75 million euros net earned in the first half of last year.

According to Berdowksi, the first half of the year was sharply split. ‘The dredging activities and the higher segment of the offshore energy market performed well, but the services side of the offshore segment, and particularly at the lower end of the transport market, was definitely hurting. After reviewing our position in this segment, and given the fact that there is no prospect of improvement, we have decided to fully exit this loss-making market segment.’