Jacket for TenneT is ready for transport 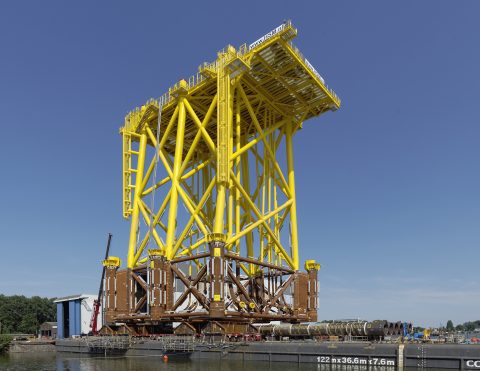 The 55 metre high substructure for TenneT’s first offshore platform in the Borssele wind farm zone has been completed. The load-out of the jacket at the HSM Offshore shipyard in Schiedam (Netherlands) is the first milestone for TenneT in the realization of the Borssele Offshore Wind Farm Zone project.
The jacket is 55 metres high, 50 metres long and 28 metres wide, and weighs approximately 2730 tonnes. During the load-out, the jacket was loaded onto a sea-going barge using self-propelled modular transporters (SPMTs). The jacket was driven from the quay via steel planking onto the barge. This was a time-consuming job, because the ballast tanks of the barge had to be alternately filled and emptied to maintain stability during the loading procedure.

Installation
Martin Kooijman of HSM Offshore: ‘The load-out of the jacket for the Borssele Alpha transformer station marks the end of a busy period, in which we worked very hard to build this impressive structure from simple steel plates and tubes. This is a true feat of Dutch engineering that will also benefit Dutch society as a whole. We are proud to contribute to this project.’
On Sunday 5 August, the barge will be transported via the Nieuwe Waterweg canal to the Borssele I wind farm zone, where the jacket will be installed on the seabed by a crane vessel. Piles will be installed using hydraulic hammers, and a special type of cement will then be applied between the jacket and the piles in order to anchor the jacket in the seabed. These activities are scheduled for the period between 6 and 16 August.

Wind energy
Wilfried Breuer, member of the TenneT Executive Board and responsible for the company’s offshore activities, says: ‘The offshore electricity grid that TenneT is realizing in the Dutch sector of the North Sea is truly taking shape. I am proud that we can make such a major contribution to the energy transition, in which offshore wind energy plays a crucial role.’
His words refers to the Dutch National Energy Agreement that stipulates that renewable energy sources must account for at least 16% of the overall Dutch electricity supply by 2023. To achieve this target, the Netherlands must generate more wind energy, both on land and at sea. The construction of an offshore electricity grid by TenneT plays an important role in this process.