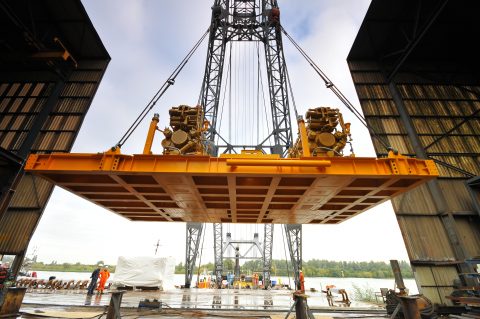 In the coming years, the heavy lift sector is at risk of losing vast amounts of technical knowledge as highly experienced, older professionals retire, warns Richard Krabbendam. “They will no longer be able to pass on their knowledge to youngsters. Not enough companies are internally focusing on that transfer of knowledge and on training and education.”
The Dutch heavy lift specialist has years of experience in the industry, including at Jumbo Maritime. Since 2010, he has been an independent consultant and engineer, giving seminars and training courses on heavy transport and safe hoisting all over the world. This year will be his last: he is 73 years old and will also be retiring.

Overcapacity
Krabbendam has experienced the changes of the past twenty years up-close. “An enormous overcapacity has emerged. First too many ships were added, then low oil prices reduced the amount of work available. Companies went bankrupt, were taken over or consolidated…. but the overcapacity remained. After all, the number of ships remained unchanged.”
“Now, things have slightly improved. But there are still too many ships for too little cargo. Too much tonnage is available.”

Safe working environment
Due to the decline in work and the drop in rates, companies are forced to cut costs. But Krabbendam feels that the wrong choices are made in that respect. “Not enough is invested in knowledge and safety. Training is crucial. In the aviation sector, by far the safest industry, people are well aware of this. Much more so than in the heavy lift sector.”
“It is the responsibility of an employer to create a safe working environment for staff. Employees are a company’s most important assets. No matter how fantastic your ships, vehicles and cranes are: without well-trained people they are useless.”

Knowledge exchange
Krabbendam advocates the exchange of knowledge between companies. Also regarding accidents and near-incidents.
“Similar to what happens in the aviation sector. There, if research shows that an aircraft or a part has a technical problem, this is published and all the airlines take measures. If a crane topples in the heavy lift sector, the company prefers to keep this quiet for fear of damaging its reputation. While everyone could learn from these incidents, thus potentially preventing new incidents.”