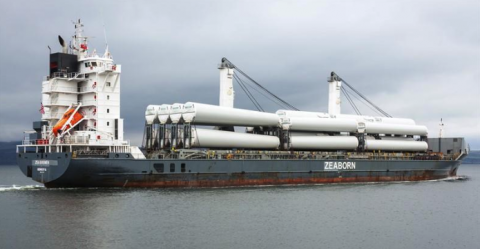 Following the acquisition of Rickmers-Line, shipping line Zeaborn has become a major player in the project cargo and heavy lift segment. China constitutes an important market in this respect, but Presidents Trump and Xi are causing anxiety.

‘As a shipping line, you need a constant volume of steel shipments in order to be profitable, to be successful in the heavy lift and ro-ro segment’, said Benjamin Joithe, commercial manager for China at Rickmers-Line, at a meeting of the WWPC (Worlwide Project Consortium) in Amsterdam.

‘And steel in particular happens to be the subject of intense discussions between the US and China. Should the transport of steel actually come to a stop, then this whole market will have a big problem. It will cause total chaos among the shipping lines.’

More issues are at play for a company that is active in China with, among other things, a liner service though. ‘China is the most important market for Rickmers; we have a two-weekly scheduled service between China and the US, which is unique in the world.’
However, the country is going through major changes. ‘In 2016, the most recent five-year plan came into effect. This plan is very special, because it runs until 2021, the year in which the Chinese Communist Party will mark its 100th anniversary’, explains Joithe. ‘Any new policy that is developed now is geared to that centenary.’

Politics is still dominated by growth. In terms of the economy, but also regarding regional influence. Furthermore, it is of great importance to President Xi to ensure stability in the country. ‘Xi’s emphasis on fighting corruption must be seen in that light. Corrupt civil servants cause frustration among the population and undermine confidence in the party.’

According to Joithe, the strict enforcement of rules is relatively new. ‘Following a number of major accidents, this has become particularly apparent regarding the handling of dangerous goods in the ports; the rules are now strictly adhered to.’ He indicates that the same applies to the fight against corruption: ‘In this respect, greater compliance is expected as well. Not being compliant poses a serious risk. The authorities like to set examples, also if a foreign company is involved.’
Whereas President Xi’s mission is to ensure stability in China, the European Union mainly operates fragmented and there is chaos in Trump’s America. Joithe: ‘China is confident. Under Xi, European parties can also still be successful in China, but you have to take into consideration Chinese sentiments.’
‘One of the most interesting projects launched by Xi is without doubt the One Belt One Road Initiative, the New Silk Route’, says the manager of Rickmers-Line. ‘This comprises much more than a railway line to Europe. The impact on countries such as, for example, Pakistan is enormous. Soon, about one billion barrels of oil will pass through the ports of Pakistan every year. With Chinese support, thousands of kilometres of highway and tunnels are being built and ports are being modernised to make this possible.’
This development also makes apparent the relationships in the region. ‘China and India have never had close ties – and the same definitely holds true for India and Pakistan. It is now Pakistan that is benefitting enormously. That also changes the balance of power in the region’, says Joithe, who has been active in China for ten years.

Two presidents
Like their fellow shipping lines, the managers of Zeaborn/Rickmers are closely following the relationship between Presidents Xi and Trump. ‘Their relationship has a direct impact on our activities – especially when certain cargo flows are affected by sanctions or import duties.’

For shipping line Zeaborn, which has become a major player in the project cargo and heavy lift sector following the acquisition of Rickmers-Line, China constitutes an important market. Presidents Trump and Xi, however, are causing anxiety. From the US, mainly soy – a low-grade product – is exported to China. ‘A tonne of soy represents a value of only 450 dollars, not much of a margin for a shipping line. Substantial volumes of cement are among the commodities transported from China to the US. Steel, the current point of contention between America and China, represents 9% of Chinese exports.’
If the anti-dumping measures continue, this volume will disappear from the market, substantially impacting the business operations of companies such as Zeaborn. ‘You need steel for profit in this market, it is the solid foundation of your business operations.’
All this while the actual impact on the Chinese economy would be minor. ‘If Trump were to add a 50% surcharge on the price of steel, the negative impact on China’s GDP would only be 0.5%.’

Tax reduction
Besides steel, components for the wind energy market are the largest commodity for parties such as Zeaborn. Many of the parts are transported from China to the US aboard ro-ro vessels. The strong growth of these shipments to America is attributable to a tax reduction that was introduced in the US earlier. This makes it beneficial to invest in wind energy. However, there is a substantial chance that Trump will terminate this agreement. After all, he is much more in favour of coal mining and the generation of nuclear energy. ‘At this point, we are simply unable to plan, to invest. That causes stress. At any moment, Trump can make a decision that affects us.’

Shipping lines are secretly dreaming of a New Deal, similar to the one implemented by President Roosevelt in the past. ‘Substantial investments should be made in infrastructure. Many bridges and locks, but also trucks and trains, are more than 40 years old. Donald Trump promised to invest in infrastructure, but so far he has failed to do so.’ The same holds true for power plants, for which Rickmers-Line transports many transformers.

‘A transformer is the icing on the cake, the margins are excellent. But Trump has now introduced an import levy on transformers from South Korea.’

And that is not the only problem that the manager sees himself confronted with. ‘The One Belt One Road Initiative always takes priority over other cargo in Chinese ports. That is an issue if, like us, you offer a guaranteed sailing schedule. Sometimes we have to wait 6 to 8 days, also because there is a substantial shortage of workers in ports such as Shanghai.’