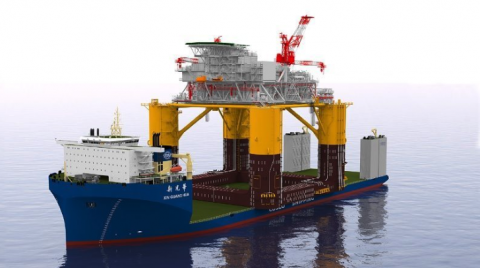 Cosco Shipping Specialized Carriers has won a major project from Shell. The shipping line will transport the new production platform Vito from Singapore to the Gulf of Mexico.

Cosco will collect the floating production platform from the shipyard in Singapore with the semi-submersible heavy cargo ship Xin Giang Hua to next set sail for the Gulf. This is the third major transport that Cosco has carried out for Shell since both parties signed an agreement for cooperation in 2014.
The Gulf of Mexico is an important extraction area for Shell. The oil company recently discovered a new oil field there and announced at the end of May that it would commence production in the Kaikias field one year earlier than planned. This is a deepwater field, but with a relatively low break-even price of 30 dollars per barrel. Shell expects to be able to increase the production of the field to 40,000 barrels per day.
For the Vito field, the break-even price is 35 dollars per barrel since Shell has substantially reduced the operational costs. The peak production of the field is 100,000 barrels per day and the field is expected to hold a supply of 300 million barrels. Shell has a 63.11% stake in the field; the remainder is owned by Statoil USA. Production is scheduled to commence in 2021.