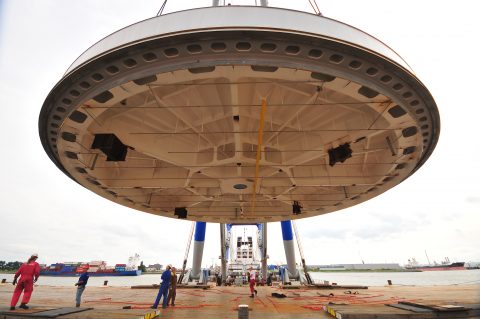 Lawyer Marcel Verhagen can tell that the projects market is starting to pick up again due to a decrease in the number of court cases. ‘It’s not booming yet like in the last couple of years leading up to 2008. Back then, litigation hardly occurred. Companies simply did not have the time – and in the case of a setback, they would compensate for this with the next job. If the market is bad, companies are more inclined to litigate, to fight for every penny.’
Verhagen is a partner at Dock Legal Experts in Rotterdam and is considered an authority on legislation relating to the maritime and offshore sector and on legal matters related to port and transport. Among other things, he serves on the board of TAMARA (Transport And Maritime Arbitration Rotterdam Amsterdam). Verhagen is a member of the advisory board of Project Cargo Summit.
His work entails much more than disputes and court cases. In fact, Verhagen actually devotes a great deal of time to drafting up or assessing contracts. Verhagen: ‘On the one hand we perform first aid, on the other we focus on prevention … We advise companies on the best course of action for them. Since many contracts are governed by English law, it sometimes happens that someone accidentally skips over a clause. Next, it for example becomes apparent that a ship can first call at various other ports before sailing to your port of unloading.’

Brexit
Brexit is a frequent topic of discussion and speculation. Verhagen however feels that the United Kingdom’s departure from the European Union will have a limited legal impact on the maritime sector and offshore. ‘London is the global epicentre for maritime service provision when it comes to banks, insurers and lawyers. Will that change? I don’t think so. This goes beyond the European Union; London serves the whole world.’
‘From now on, new contracts will however include an exit clause for when the Brexit is a fact and existing contracts will be amended. But I do not think the situation is as dire as it is made out to be.’

BIMCO contracts
Verhagen does not anticipate a shift in the number of procedures from London to, for example, TAMARA in the Netherlands. ‘As long as the BIMCO contracts and clauses are mainly used for international trade and shipping, standard arbitration will take place in London.’
TAMARA is gaining in popularity, but that is mainly due to the possibility to (cost)effectively litigate via a digital platform, is Verhagen’s experience. ‘The fact that you do not need to appear in person saves time and costs. In England, court hearings are highly valued and sometimes they can take a week. Just do the maths in terms of costs: three arbitrators, lawyers and witnesses who need to be flown in … But you cannot change such a tradition overnight. There has been litigation in London for more than 200 years; we cannot change that in ten or twenty years.’

Emergency assistance
Verhagen himself also still chooses to take court cases to London. ‘For certain cases, for example when emergency assistance is rendered, this is the smartest option. In the Netherlands, a tug that has saved a ship would only receive a fraction of the applicable compensation compared to England. With the interest of my client in mind, I would not bring such a case to court in the Netherlands.’

Marcel Verhagen, partner at Dock Legal Experts in Rotterdam, is member of the advisory board of Project Cargo Summit.