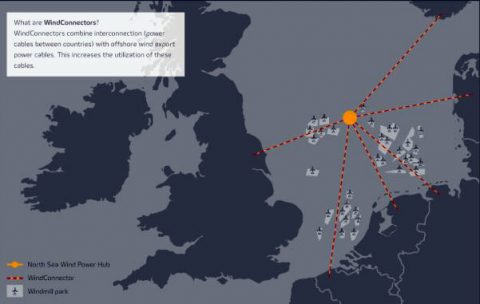 Innogy and TenneT have signed a letter of intent to jointly investigate the opportunities of offshore wind cross-border interconnectors across the North Sea. The parties will initially investigate feasible design options, the economic rationale, and the regulatory and market requirements of such a combined and international infrastructure.

This investigation will particularly focus on the opportunities for the large scale deployment of offshore wind in the North Sea, further off coast. The UK already has projects in development, including innogy’s 1.2GW Sofia project. Innogy, Germany’s leading energy company, and TenneT, the Dutch electricity transmission system operator, will pool their experience and insight to establish the practical benefits of different approaches to building the necessary infrastructure. Both parties have a track record in offshore wind projects in the North Sea.

Offshore wind farms
innogy is one of the world’s leading operators of offshore wind farms. The company has been involved in the deployment of more than 2.5GW of offshore wind capacity in Europe and has a significant future offshore development pipeline worldwide. This includes the 860MW Triton Knoll project in the UK, which won a UK Government auction for support in 2017, and the 325MW Kaskasi project in Germany awarded by the German government in April 2018.
TenneT has a track record in the delivery of offshore wind transmission infrastructure, having completed 7 HVDC and 3 HVAC offshore grid connections in Germany which sum up to more than 5.3 GW capacity by now. The company will connect 3.5GW of capacity in the Netherlands by 2023 and 10.4 GW in Germany by 2025.

North Sea Wind Power Hub
TenneT’s CEO Mel Kroon says: ‘Given WindEurope’s forecasts of the planned deployment of up to 70 GW offshore wind by 2030, new approaches must be investigated to connect large scale offshore wind to the onshore grids. A North Sea Wind Power Hub system supports the deployment of significantly larger volumes of offshore wind. The cooperation with innogy offers us a perfect opportunity to investigate such new approaches.’
innogy Renewables COO Hans Bünting says: ‘Research and development is crucial to bring renewable generation to the next level. Connecting offshore wind projects into an independent transmission system creates the potential to feed into multiple markets. The main benefit will be the ability to supply consumers with larger volumes of cheap, predictable and low carbon offshore wind power well into the future. With this research project we become a trailblazer for the whole offshore industry.’