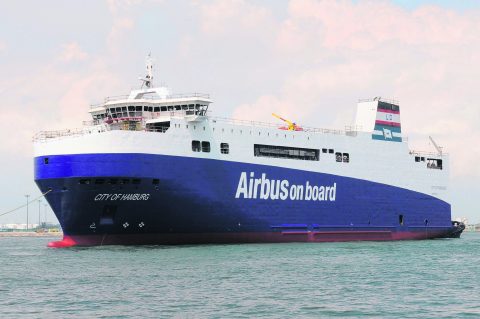 The logistics planners at manufacturer Airbus have their hands full with organising the transport between the various factories. Ro-ro ships play an essential role in the transport chain.

It takes between three and four million parts to assemble an Airbus. In order to deliver the aircraft to the customer as scheduled, the supply chain has to be tightly planned and perfectly timed. At the same time, the pressure on the logistics chain is however increasing at Airbus.

Despite a follow-up order from Emirates, the order books for the A380 have remained rather empty, whereas sales of the A320 remain high. At present, an average of 50 of these aircraft are constructed per month and the production time has been halved.

When the A320 was introduced, it still took 12 weeks to produce but now the aircraft rolls off the factory floor after six weeks of construction. Next year, the target for the employees in Hamburg, Toulouse, Alabama and China will be 60 machines per month and quietly a production of 70 planes per month is already anticipated for the future.

Definitely a challenge, also for the Hamburg-based logistics team. ‘We cannot allow the supply of parts to become congested’, says Hendrik Fransson. The 47-year-old Swede has been heading the transport logistics department in Hamburg for five years. ‘To accommodate the growing number of aircraft that we are building every month we have already been continuously renovating for the last two years in order to optimise the transport within our organisation.’

One example is the fourth A320- assembly line that was commissioned in Hamburg a year ago. In addition to these production lines, Franksson’s team is also responsible for constantly supplying the other three factories with parts.

Weight classes
Not only do most of the components for all the sites pass through the factory in Hamburg, but the weight classes also strongly vary. From parts weighing a few hundred kilos and for which the logistics department prepares the transport by road, sea or air to the delivery of fully-fuelled A380 aircraft weighing 575 tonnes.

“Airbus on board”, it says in large white letters on the blue hull of the ‘City of Hamburg’. Several times a week, people walking along the Elbe in Hamburg can see the ro-ro ship sail past. The cargo ship was initially used for the transport of A380 parts, but due to the faltering demand for this jumbo its hold now mainly carries fuselage parts from the A350 and A330 family.

The 127-metre-long ship takes the parts to St. Nazaire on France’s Atlantic coast. There, they are consolidated with other parts to eventually travel on by barge and truck to Toulouse, where the planes are assembled.
In the other direction, the French logistics company Louis Dreyfus takes the cockpits and connection parts for the A320’s fuselage and wings back from France to Hamburg.

Since the start of this month, Dreyfus has also been sailing across the Atlantic Ocean from St. Nazaire. The French port city has developed into a hub for the large parts required in Alabama. For the first three years following the commissioning of this Airbus factory in the United States, shipping company BBC Chartering still used the City of Hamburg or its two sister ships to transport the fuselage segments directly from Hamburg to the United States, but the chain has now been optimised.

The 80-metre-long Kugelbake, carrying parts of Airbus subsidiary Premium Aerotec on board, is another frequent visitor to the port of the Hamburg Airbus factory; Premium Aerotec specialises in the assembly of fuselages and is located in Nordenham near Bremerhaven.

The ro-ro ship, which is owned by the company Otto Wulf, transports A320 fuselage segments, which are transhipped to container vessels from Cosco in Hamburg. This shipping line next transports the containers to Tianjin in China. In addition to the large ships, a large number of river shuttles are also deployed. In total, some 650 shiploads pass through the Airbus quay in Hamburg annually.

No rationalisation
It would be easier for the logistics planners – and certainly also cheaper for the company – to more strongly consolidate the manufacturing of components and concentrate this in one location. But such a rationalisation is not possible for Airbus. The activities of the aircraft manufacturer are considered of great strategic importance in the various countries of operation. Germany and France each hold 11% of the shares, Spain has 4%.

The assembly structure and culture have developed over a long period of time; each branch has its own roots in aircraft construction. This manner of dividing labour ensures that employment is preserved; of the employees of Fransson, but for example also of the pilots who fly the gigantic Beluga cargo airplanes between the various factories three to four times a day – 1200 times a year using five Belugas. The purpose-designed aircraft can be loaded in 90 minutes – 30 minutes of which is taken up by paperwork.

In the future, even speedier operations will be possible: from next year, the old airplanes will be replaced by five new BelugaXL aircraft. Where the old models were capable of carrying one wing per flight from England to Toulouse, their 63-metre-long and 19-metre-high successors will simultaneously transport two wings. With the introduction of the XLs, the transport capacity of the group will increase by 30%; at the same time, handling will be completely digitised. ‘The BelugaXL gives us much more volume in the sky, which greatly increases our flexibility’, hopes Fransson.