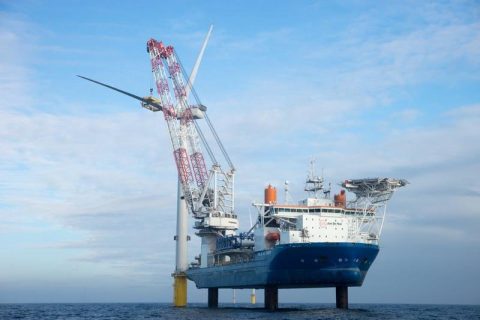 Jan De Nul Group from Belgium and Hitachi from Japan have signed a contract with Taiwan Power Company concerning overall work for the manufacturing and installation of 21 5.2 MW wind turbines (109.2MW). It will be constructed off the coast of Fangyuan in Changhua County in Central Western Taiwan.

The work includes design, manufacturing and installation of all foundations and wind turbines as well as maintenance for a period of five years. The overall project has a value of about 700 million euros. Two-thirds of that amount is for Jan De Nul, who will be the leader of the consortium.

Under the Changhua Offshore Wind Farm Project Jan De Nul will be responsible for the foundation design, fabrication and installation, wind turbine installation, supply and installation of cables off- and onshore as well as for the upgrading of the electrical substation. Hitachi will be in charge of manufacturing, assembly, operation and maintenance and other work related to the 21 offshore wind turbines with downwind rotor, each with a generation capacity of 5.2 MW. Particular feature of the design is that the foundations are designed to withstand cyclonic waves and winds, and earthquake loads.

Seabed survey and geotechnical investigation will start in May 2018. Manufacturing of the foundations and wind turbines is planned mainly during in 2019 in order to deliver them in early 2020. Test operation of the equipment is targeted to start in the summer of 2020, and the completion is scheduled for the end of December of the same year.

Taiwan has announced a four-year plan for the promotion of wind power generation, which is aimed at accelerating the introduction of renewable energy. A goal under this plan is to introduce offshore wind power facilities with a cumulative total generation capacity of 4 GW.

Taiwan Power Company plans to increase the generation capacity of its offshore wind power generation facilities. Specifically, TPC aims to achieve 1 GW by 2025 and 1.8 GW by 2030. TPC has been advancing the construction plan in the open sea off the coast of Changhua, believed to be the location with the greatest wind power in Taiwan.