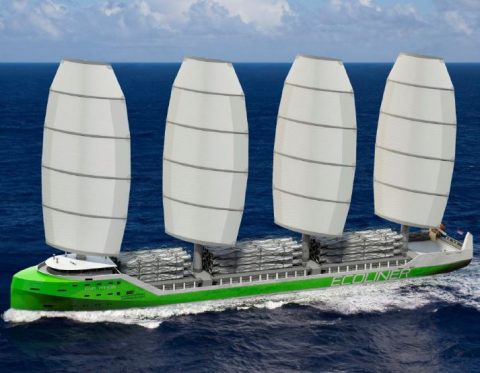 It is increasingly probable that cars will be transported all over the world using sailing ships, in years to come. The automobile industry recognises an opportunity to boost its ‘eco-friendly’ reputation, by sailing.

Three German car manufacturers have already shown a firm interest in the ‘Ecoliner’, a sailing ship with which cars can be transported all over the world. The ship is currently on the drawing board, but the day is drawing nearer that the keel will be laid somewhere at a shipyard, while the first gigantic sails will be manufactured by a modern-day sailmaker. The only problem remaining is: who will help finance the ship and actually get it out on the waves? That requires customers who are willing to accept not only the advantages but also the disadvantages of sailing.
The last great sailing vessels disappeared from worldwide trade shipping approximately a century ago. Steamships had made their appearance many years earlier, thus initiating pollution of the environment by the shipping industry. The subsequent switch from coal to bunker oil was to give little or no improvement. After all, bunker oil is one of the worst pollutant fuels.

Soot and nitrogen
According to a report published by the International Maritime Organisation in 2014, the global shipping industry emitted an annual 866 million tonnes of CO2 during the 2007 to 2012 period, which represents 2.4% of total global emissions. And that does not even take into account other substances such as soot, sulphur dioxide and nitrogen, which are produced on a large scale by ships’ engines.
Without further action, emissions by the global shipping industry are expected to continue to increase in the period up to 2050, by a further 50 to 250%. A recent report by the European Parliament foresees shipping to representa 17% share in CO2 emissions by then. We must assume that both the industry and the energy systems will have become considerably greener in the meantime. If we do nothing after all, the contribution to pollution by shipping will grow exponentially.
One of the world’s largest charter shipping companies, Döhle in Hamburg, aims to change this, thanks to the ‘Ecoliner’. Designed by the Dutch Dykstra Naval Architects agency, this ship is powered entirely by wind, for the transport of two thousand cars over the world’s oceans. The ship has five thousand square metres of sail, enabling it to reach a speed of fourteen knots, i.e. 25 kilometres per hour. The shipping company has been on the lookout for (co)financers for some time, and for customers for this ocean bound, 100% clean transport of cars.
Of all the car manufacturers, Volkswagen has shown the most enthusiasm for the project. After coming under fire when it became apparent that there were emissions data irregularities in cars marketed by VW, the concern is keen to turn over a new leaf and redevelop a ‘sustainable’ reputation. ‘It’s looking very likely’, was the reaction of a VW sspokesperson, speaking to the Die Welt newspaper. He was referring to the great probability of VW participating in the Ecoliner ship. Volkswagen is apparently also cooperating with the Hamburg Sail Cargo in the development of a wind-powered cargo ship. Daimler and BMW have also expressed interest, though with a little more caution.
The three car manufacturers not only transport ready-made cars all over the world, but also import cars which they have had manufactured at foreign production locations. The car carrier would therefore theoretically never need to sail empty. The same applies to the ‘Ecoliner’ of course, the difference being that an empty sailing ship is less ‘wasteful’ than a conventional car carrier. After all, the former does not emit any pollutants into the atmosphere at all.

Hybrid
The original version of the ‘Ecoliner’, as sketched by the Dykstra architects on the drawing board, concerns a ship of more than 130 metres long, weighing 8000 tons, with four high masts. At 180 metres, the car carrier envisaged by the Döhle shipping company is slightly longer. Even then, it could only transport two thousand cars, while standard giant car carriers have sufficient capacity for double this number. Anyone looking to transport such large numbers of cars therefore, would require two sailing ships.
The target is to have the first car transport sailing ship roll down the shipyard slipway in 2018. In subsequent years, the fleet is expected to develop to 15 or 25 vessels. The first ship will be a hybrid version, in that it will also be equipped with a diesel engine and electrical engine. The target is to be wind powered for 80% of the total journey. Later versions will only utilise an electrical engine when manoeuvring in ports and on very busy ocean routes.
Unlike the sailing ships of yesteryear, the ‘Ecoliner’ will have no need for a large crew. Where the hoisting and trimming of large sails formerly required a great deal of manual work and time, the process can nowadays take place fully automatically, managed by a computer.
However, the greatest saving when sailing is that no bunker oil is required, thus doing away with a major cost item of the conventional cargo shipping. The wind is available free of charge, ridding the ships of this cost item. Of course this is at the same time a disadvantage. When the wind drops, the ship must rely on the electrical engine, which in itself is expensive. Severe storms also make for problematic sailing, once again requiring a switch to the engine.