The parallel worlds of breakbulk 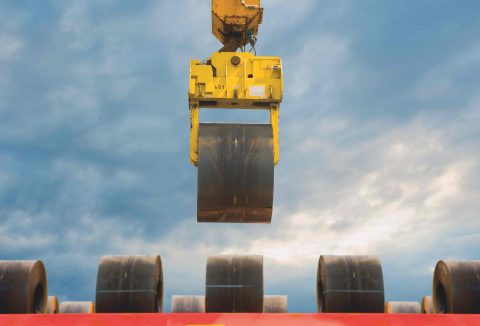 Just like the container shipping sector, the breakbulk market is subject to very fierce competition. The world of breakbulk, ro/ro and heavy lift however is so diverse that it does not really constitute one single market: it is possible for true winners and true losers to co-exist alongside one another within the various segments.

Håkan Modig, CEO of the Finnish shipping line Bore, and Spliethoff CEO Michael van den Heuvel probably needed little time to agree that the Dutch shipping company Spliethoff would take over the ro/ro operations of Bore, including its fleet and staff . In the shipping sector, the acquisition of Bore’s rolling cargo operations by Spliethoff is relatively insignificant. After all, the deal is so minor that it didn’t even require the involvement of the competition authorities. For the companies involved, this however is a big step. “In recent years, ro/ro has developed into an important part of our business; in that respect, we offer fast liner services between the European continent and Finland,” says Spliethoff CEO Michael van den Heuvel about the acquisition. “By incorporation Bore within our group, we are able to further expand our position in this segment of the market and create new opportunities.” Bore, almost 120 years old, has traditionally held a very strong position on the Baltic Sea, the North Sea and the Mediterranean. “By joining the Spliethoff Groep, Bore is able to develop its fleet and activities in such a manner that allows the company to meet the future challenges in a competitive market,” adds Modig. Although the incorporation of Bore by Spliethoff is by no means headline news, this acquisition very accurately reflects the current situation in the ro/ro market. The maritime transport of rolling equipment is quite profitable, providing the shipping company has its act together. And freight volumes in the ro/ro sector will definitely continue to grow in the foreseeable future. However, ro/ro is certainly not representative of the entire breakbulk sector. Other breakbulk segments have been struggling for some time now – or still are. Shipping lines solve this through acquisitions and, similar to the container shipping sector, the consolidation of services.

Regardless of which measures the shipping companies take, patience and perseverance remain key. The British maritime consultancy firm Drewry expects the growth in the breakbulk sector to slow down this year already; it also expects the market to remain extremely weak until at least 2017. In its latest Multi-purpose Shipping Market Review and Forecast, the consultancy firm predicts minimal growth for this year and an increased demand for capacity of about 1.4 percent in the period up to 2018. “Overcapacity coupled with low freight rates still pose a challenge for the profitability of dry bulk and container shipping,” explains Susan Outway of Drewry. “This will strengthen the competition between container shipping and dry bulk shipping regarding both project cargo and breakbulk cargo. We expect the container trade to further penetrate the market for project cargo and the dry bulk sector that of the breakbulk sector. This results in a lower market share for the multipurpose fleet.” That the dry bulk fleet is taking market share away from breakbulk also becomes apparent from another prognosis by Drewry.

While the growth in capacity demand for breakbulk is expected to remain stable at less than 1.5%, the British marine research agency expects the capacity demand for dry bulk to grow by 3% until 2018. While shipping lines must struggle for each single percent of market share in the breakbulk sector, terminals active in breakbulk, heavy lift and project cargo are actually doing quite well. The breakbulk market on the quay and that on the water seem like two completely different worlds that coexist in parallel. Especially in the ports of Antwerp and Rotterdam, substantial investments in dry bulk capacity are being made. Last year, Pacorini Metals opened its terminals at Rotterdam’s Merwehaven on a 12.5-hectare site with a quay of six hundred metres in length. Here, the company mainly focuses on non-ferrous metals and soft commodities such as coffee, cocoa and fruit. Halfway through this year, the joint venture between SIF Group and Verbruggen International is expected to commission its terminal at the Second Maasvlakte. The 42-hectare site is earmarked for the production, transhipment and storage of foundations for off shore wind farms and the oil and gas industry. Rhenus Deep Sea Terminal is constructing a second quay at its terminal at the Second Maasvlakte and the Broekman Distriport Terminal on the Theemsweg in Rotterdam has been expanded with a roll-on/rolloff ramp and 50,000 square meters of space for the storage, transhipment and distribution of cargo to and from the west of Scandinavia. At the former RDM site, the Off shore & Heavy Lift Centre of the Broekman Breakbulk Terminal at Rotterdam’s Waalhaven area covers 16,000 square meters of fl oor space with four modern halls equipped with overhead cranes that can lift from 75 to 700 tonnes. “The energy and off shore industry is increasingly seeking assembly space directly on the water,” said Raymond Riemen, CEO of Broekman Logistics, during the opening. “This way, cargo doesn’t need to be shipped to the factory again, saving costs.”

Broekman made the investment in the Off shore & Heavy Lift Centre in cooperation with Port of Rotterdam, which has invested fift een million euros in the project; within the breakbulk segment, it mainly focuses on heavy lift and project cargo. Last year, the port of Rotterdam noted a 6.5% increase in the transhipment and storage of breakbulk to over 27.7 million tonnes. This growth is fully attributable to the ro/ro segment, which increased by 10.1% to 22 million tonnes. The storage and transhipment of other general cargo decreased by 5.5% to 5.7 million tonnes. And the breakbulk sector definitely still off ers more potential for growth. In the first quarter of this year, the total throughput in Rotterdam increased by 2.7% to 6.6 million tonnes. Roll on/roll off transport to Great Britain in particular is growing, but the handling of other general cargo is also substantially increasing. With an increase of 6.7% to 1.2 million tonnes in the first three months of 2016, this growth can even be called outstanding.

Shipping companies are also aware of Rotterdam’s attractiveness as a breakbulk port. Earlier this year, the breakbulk division of the Japanese shipping line NYK selected Rotterdam for its service between Europe and the Far East. The quality of the hinterland connections, the lack of superfluous intermediaries and lower port tariff s make Rotterdam highly attractive to breakbulk carriers. “Alongside bulk cargo, we will also unload breakbulk in Rotterdam. This will simply make our port calls more effective,” commented general manager Seiji Ando of NYK in a press statement. The liner service between Europe and the Far East sails monthly with vessels between 20,000 and 30,000 tonnes between the Japanese port cities of Yokohama and Kobe and Rotterdam. The breakbulk segment is not only performing well in Rotterdam. In the fi rst quarter of this year, the Belgian port of Antwerp recorded a growth of 2.4% to 2.3 million tonnes. This increase is almost fully attributable to the transhipment of steel, which grew by 14.5% to 1.8 million tonnes. Over the course of 2015, Antwerp saw ro/ro traffic grow by 4.1% to 4.7 million tonnes.

The handling of conventional general cargo rose by a fraction: 1.2% to more than 10 million tonnes. The results are further supported by major investments in the breakbulk segment; Zuidnatie constitutes the most striking example in this respect. Zuidnatie is implementing a substantial investment programme in Antwerp which will run until 2020. Each year, the group will invest 10 million euros in its two terminals. As recently as two years ago, the general cargo terminal on the Churchilldok was equipped with two additional mobile cranes totalling 9 million euros. However, Zuidnatie did encounter some headwinds due to the fact that less steel was transported from China and India to Germany via Antwerp. Zeebrugge remains by far the largest car port in the world. In 2015, Zeebrugge set a new record by handling 2,427,950 new cars, an increase of 10.3% compared to 2014 and a staggering 40-percent increase compared to 2012. The car port mainly benefits from its Scandinavia hub and the transport of cars to the UK ports of Tilbury and Teesport. The total ro/ro volumes amounted to 13.5 million tonnes, an increase of 3.1%. The storage and transhipment of breakbulk declined in Zeebrugge last year to 1.2 million tonnes, 1.6% less than in 2014. Definitely not all the northern European ports are doing well though. Hamburg is bearing the brunt in this respect. The transhipment of cargo, including ro/ro, fell by roughly 14% to 1.7 million tonnes in 2015. The German port is disproportionately affected by the trade sanctions against Russia, which have caused the full collapse of the storage and transhipment of cargo for the Russian market. In addition, Hamburg is strongly impacted by the rise of Gdansk, causing the German Hanseatic city to lose a large proportion of its throughput to Poland. It therefore remains to be seen whether Hamburg will benefi t when the breakbulk market rebounds again aft er 2017. In view of the significant investments in Rotterdam and Antwerp and the rise of Gdansk, Hamburg should worry that it will literally miss the boat in the breakbulk segment.