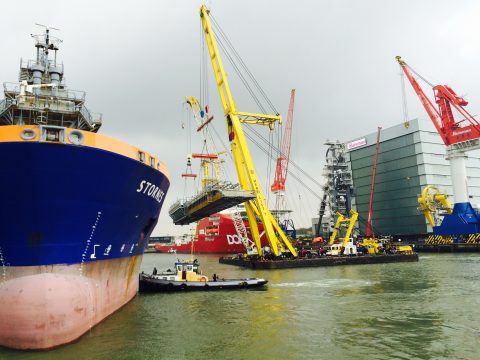 HEBO Maritiemservice performs a wide range of services on and around the water, such as the unloading and loading of special cargo using floating sheerleg cranes and crane pontoons. For this, the company will soon commission a new and unique crane pontoon which can lift as well as transport loads up to 600 tonnes.

Family company HEBO Maritiemservice was founded 27 years ago by Henk Bonsink (HEBO), the father of current directors/owners Gerrit and Wiebbe Bonsink. The company is a maritime service
provider in the broadest sense of the word; its roughly 90 employees respond to oil spills and calamities, carry out transport, salvage and hoisting operations and perform many other auxiliary services on and around the water. HEBO operates throughout the whole of Europe. One of its activities involves the unloading and loading of special, often heavy loads with non-standard dimensions, such as machinery, generators, wind turbines and silos. HEBO does this on behalf of shipping lines, shippers and producers and manufacturers of special machinery and parts thereof.
Director Wiebbe Bonsink explains that his company uses special equipment for handling these kinds of breakbulk, such as various types of floating sheerleg cranes and a crane pontoon. “Until now, we have been able to handle cargo up to 300 tonnes with this equipment. Currently, we are however building a special crane pontoon which will allow us to both lift and transport loads up to 600 tonnes. This crane pontoon will be commissioned at the end of the year.”

Pontoon with a unique concept
The new crane pontoon will be named HEBO-Lift 2. Special about the vessel is that it is being built according to a new concept unique in this class. Bonsink: “The HEBO-Lift 2 will be equipped with two cranes that can each turn autonomously. Conventional floating sheerleg cranes are equipped with one single, non-rotatable crane; in order to change the direction of the crane, the actual vessel needs to be repositioned. Our new pontoon however combines the power of a floating sheerleg crane with the flexibility of a crane pontoon. For lifting heavier loads, the cranes can be tensioned in various configurations regarding boom lengths and hoisting angles. Also special is that the HEBO-Lift 2 is capable of transporting cargo, for example making it suitable for shortsea transport.” The HEBO-Lift 2 will be stationed in Rotterdam but will be deployed in waters throughout Europe. Bonsink: “Companies can of course also call on us to just perform hoisting operations. But most companies however want us to fully unburden them from A to Z – after all, that is our specialty! We offer our clients a ‘one stop shopping’ concept for the transport of special loads.”