The ever increasing importance of breakbulk 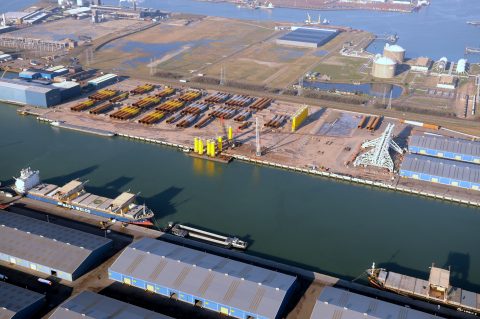 Breakbulk and project cargo are increasingly becoming more important for Zeeland Seaports. The efforts of the logistics service providers within the port are generating effect. New cargo flows are attracted with some regularity. Both on the quays and in the port, all the necessary facilities are present and there is still plenty of space available.

Vlissingen and Terneuzen benefit from their situation on open water (the Western Scheldt) and the guaranteed draught of 16.50 metres. Another strong point is the central location in Northwest Europe. Shipping lines and logistics service providers, shippers and cargo recipients alike are interested in the possibilities the ports offer, explains Marcel Pater, commercial manager Breakbulk, Offshore and Project Cargo at Zeeland Seaports. Pater says that ample space – more than 150 hectares in total – is still available in both ports.

Offshore wind
“The handling of project cargo and associated activities such as assembly require a relatively large amount of space. Take the offshore wind industry: Vlissingen plays a key role in the realisation of many wind farms in the North Sea. This sector is still growing.” Foundations and other major components are efficiently moved by barge or shortsea vessel and consolidated; next, they are transported to the wind farms out at sea using large installation vessels. “These installation vessels are quite expensive and Zeeland Seaports offers a short sailing time and smooth handling. Combined with excellent access for inland barges, these advantages consistently prove a winning combination.” Zeeland Seaports also boasts excellent road and rail connections. “And we are substantially investing here as well. Last year, the Sluiskil tunnel was opened; important for the north- south route. The doubling of the Sloeweg, the link road to the A58 motorway, will be
completed before the end of the year.”

Versatility
Zeeland Seaports has already been specifically focusing on breakbulk for years now. For example, strong clusters of specialised stevedores and auxiliary service providers have been established. The main clusters are steel &amp; metals, forest products, offshore and project cargo. Vlissingen is market leader in Northwest Europe for cellulose, which mainly arrives from South America. In recent years, various cargo flows have been shifted to Zeeland. One example is the bananas of Chiquita. In 2014, the company already decided to concentrate part of its European imports via Vlissingen. To their satisfaction, it seems, as this year volumes will be further increased and more reefers will be arriving. Confirmation of the versatility of the Zeeland ports.