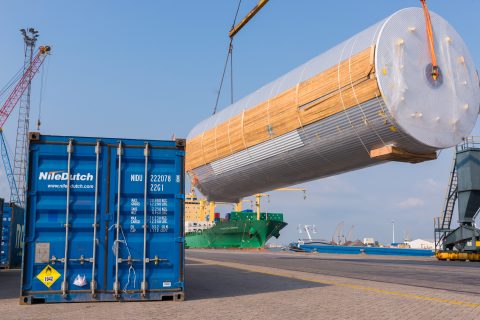 NileDutch specialises in transport to West Africa. The shipping line is essentially the only medium-sized carrier that can compete with the top three container carriers regarding global connections
with this region. The company stands out in terms of its extensive knowledge of and experience in West Africa, the extensive range of services on offer and the direct contact it offers clients.

Senegal, Ivory Coast, Ghana, Nigeria, Equatorial Guinea, Cameroon, Democratic Republic of Congo, Congo-Brazzaville and Angola: just a few of the West African countries served by NileDutch. In
Europe, the Dutch shipping line does this through liner services from the Benelux (Antwerp), France (Le Havre) and Portugal (Lisbon and Leixoes) to Senegal (Dakar) Cote d’Ivoire (Abidjan), Congo-Brazzaville (Pointe Noire) and Angola (Luanda and Lobito). From these destinations in Africa, cargo is next transported onward to other destinations in West Africa using the shipping line’s extensive feeder network. NileDutch also serves West Africa from the Far East, South Africa, South America, the eastern Mediterranean and the east coast of the United States. COO Jan Willem de Braal: “We are the only comparatively small carrier that offers liner services from across the globe to West Africa. We do this with our own ships and the – mostly dedicated – ships of our partners.” NileDutch is headquartered in Rotterdam and operates a network of offices and agencies throughout the world. In total, the shipping line employs about 600 people.

Tried and tested in West Africa
Over time, NileDutch started to transport increasing numbers of containers to West Africa. In recent years, there has however been a clear upswing in Ro/Ro and breakbulk again. For these flows,
NileDutch deploys MPVs, Multi Purpose Vessels capable of transporting containers, Ro/Ro and breakbulk. The Braal: “This allows us to operate far more efficiently. We consolidate shipments
aboard our MPVs and also call at smaller ports.” NileDutch has a wealth of knowledge about West Africa and years of experience with local cargo handling procedures. This distinguishes the shipping line from others. “In West Africa, the rules may change suddenly or problems relating to infrastructure or certain practical issues may occur. In those cases, it is important to know the
country and the culture well. We are tried and tested in West Africa and our people are highly knowledgeable of the local situation. This allows us to optimally support our customers; one of the
reasons why many shippers rely on us to carry their cargo to West Africa. In addition, we build long-term relationships with our customers, are available round-the- clock and keep the lines of
communication short. Because with us, the customer comes first.”