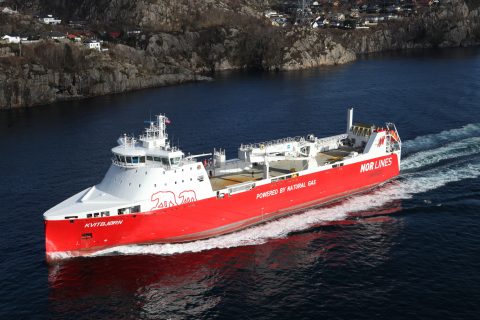 Nor Lines is a Norwegian shipping line that transports frozen fish from Norway to the Eemshaven and among other things takes back breakbulk as return cargo. Since last year, the company has
been using two new ships for this. The ships are powered by LNG and besides frozen products they can also transport trailers (ro/ro), containers and pallets. The Kvitbjørn (White Bear) and the Kvitnos (White-beaked Dolphin). These are the names of the two new ships of Nor Lines which now maintain the weekly liner service between the Eemshaven, Cuxhaven in Germany and about 30 Norwegian ports. Sealane Terminals acts as the agent and stevedore for Nor Lines in North-west Europe and among other things arranges the storage and transhipment of frozen fish. Sealane has 25 employees at the Eemshaven in Groningen, where it operates a 3.5-hectare terminal, two 150-metre quays with a water depth of nine metres, a cold store for 20,000 pallets and a covered storage facility of 2000 m2 for non-temperature controlled cargo.

Manager Sales & Operations Jurjen Gravendeel explains that the ships of Nor Lines fit in with a new concept in which the shipping line transports higher volumes and more varied kinds of cargo in addition to temperature controlled products from the Eemshaven and Cuxhaven to Norway. “The layout of and special facilities aboard the new ships offer many more possibilities for this. A much greater variety of return cargo can be transported, which is handled much faster as well.”

Relatively clean transport
The Kvitbjørn and the Kvitnos can for example store 2,000 tonnes of frozen products at -25 degrees Celsius; there is also a ro/ro deck with a capacity of about 40 trailers and the deck outside can
accommodate approximately 40 containers. So plenty of options to transport breakbulk, but also containers and other non-temperature controlled cargo, to Norway. As an additional advantage, the
new ships sail on LNG, making the transport relatively clean. Gravendeel “Because it is currently not yet possible to bunker LNG in the Eemshaven, the ships take LNG aboard in Norway for the entire trip. Groningen Seaports however is working hard to realise LNG facilities.” Sealane among other things focuses on the acquisition of return cargo for Nor Lines. Gravendeel mainly targets specific flows such as building materials (e.g. roof tiles, insulation materials and components for offshore wind farms), packing materials and garden centre products such as potting soil and garden furniture in that respect. “Since the commissioning of the new vessels, we have noticed a significant increase in the non-temperature controlled return flow to Norway. This is because we have a lot to offer to shippers on this route.”