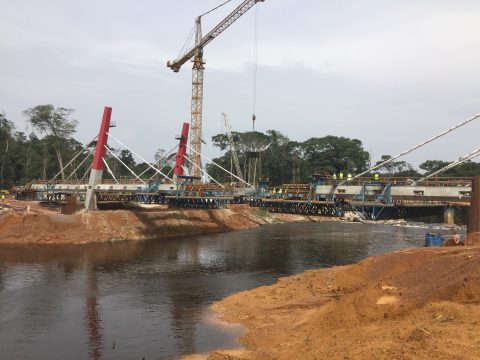 BESIX, the largest construction company in Belgium, is mainly active in Europe, Africa and the Middle East. The company uses subcontractors to transport materials but always retains full control in this respect. Everything runs smoothly thanks to the software of Intris.

BESIX can be associated with such prestigious projects as the Khalifa football stadium (for the World Cup 2020 in Qatar), the impressive Belgian pavilion at the World Expo in Milan (2015), the Burj Khalifa in Dubai (the tallest skyscraper in the world) and numerous other spectacular structures. “We outsource the transport of materials to specialised transport companies, but we manage
everything and always retain full control,” explains Pascal Beeckmans, director Procurement & Logistics. “We work with different forwarding agents. Some cargo, especially urgent spare parts,
needs to be transported by air, but most often maritime transport is used. And for European projects, we generally use road transport.” All transports are monitored by BESIX right up to the final
destination, including the document flows.

“In total, some 2,000 to 3,000 maritime shipments a year are involved, mainly groupage consignments from 10 to 15 different suppliers. This means 15 different loading lists and customs documents, which makes monitoring these flows relatively complex.”

“Until a couple of years ago, we monitored our shipments using a program that was developed eight years ago, but on a platform that is now no longer current. Furthermore, we were looking for a more transparent reporting system. We could either fully ‘rebuild’ the system we were using or turn to an external partner who could ensure that the system was always up-to- date. We opted for the latter and were thus introduced to Intris. It became apparent pretty quickly that they were the ideal partner for us, for three reasons: the price, the functionalities and their references. They had an
adequate response to all possible cases that we presented to them and these solutions were easy and user-friendly as well. Furthermore, we knew several of their customers and they highly praised
their system and method of working.”

With TRIS Forwarding, BESIX now has a solution that allows the company to manage cargo flows in a transparent manner; which volumes were shipped, what was their value and how do staff
deployment and revenues relate to one another? “TRIS Forwarding allows us to be much more exact in our offers and our transport organisation,” concludes Pascal Beeckmans.