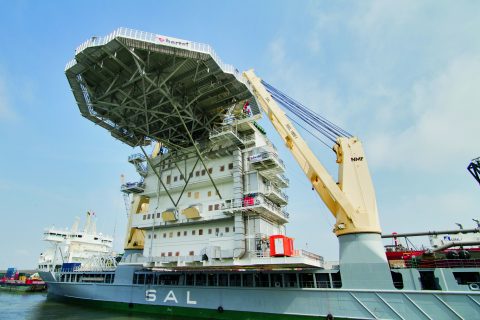 Further containerisation will occur in the breakbulk sector, but the need for traditional breakbulk vessels will always remain. After all, not all types of cargo can be put in containers. This predicts Simon Yntema, managing director of Pacorini Metals Nederland, a logistics service provider specialising in the logistics and storage of breakbulk.

“We are a logistics company pur sang which offers storage and handling services in the broadest sense of the word,” says Simon Yntema about his company. “We handle non-ferrous metals, minor metals and ferroalloys. We can charter ships and put cargo on trucks and inland barges, unload and load vessels and store cargo. In addition, we offer a wide range of value-added logistics. In terms of ferroalloys, this involves blending, sifting and crushing. Regarding non-ferrous metals, we for example cut nickel plates. We also weigh and repack shipments.”

In the Netherlands, the company is one of the biggest players in this market segment. Yntema was there when Pacorini (still the old company, see box) started in Flushing in 2000. Today, the company has two branches in Flushing (a bulk terminal in Nieuwdorp and a branch at the Engelandweg) as well as a branch in Rotterdam’s Botlek area. Volumes have grown rapidly. “Previously, our range of activities was much smaller. But Glencore, which acquired the metal division of Pacorini in 2010, has built up large stocks here in Flushing.” In Flushing, Pacorini Metals works together with Verbrugge, a well-known terminal operator and logistics service provider in Zeeland. Yntema: “They do the work at the terminals and we arrange everything. We check everything and maintain contact with the customers. Our recent expansion of warehouse space is also a joint venture with Verbrugge,” says the managing director of Pacorini Metals Nederland.

Cheap port
Yntema is very pleased with the facilities in Flushing; the location of the Zeeuwse port is excellent. “There is ample space here, room to build. And right on deep water too, without limitations in the form of locks or barriers. The infrastructure is outstanding, also to the hinterland. Much of our cargo is moved to Belgium and France, which can be very easily accessed from Flushing. There is hardly any road congestion here and prices are cheap.” Nevertheless, Pacorini Metals has also had a branch in Rotterdam since 2005. “No port can compete with the connections Rotterdam offers. Certain traffic flows cannot be moved through Flushing. Our operations there are eight to nine times the size of those in Rotterdam. However, this will change soon as we are rapidly growing in Rotterdam.” In the Rijnmond area, Pacorini Metals works together with the Broekman Group.
Pacorini Metals mainly handles non-ferrous metals. The warehouses are therefore LME (London Metal Exchange) certified. Aluminium is by far the largest cargo segment. The company manages stocks of traders and organises the distribution to end users. Virtually all of the aluminium comes in by sea-going ship from Russia, Scandinavia, South America, China and the Middle East. Sixty percent of cargo is moved to the end user by truck. Approximately twenty percent is put aboard a barge, five percent on the train and the rest on sea-going vessels (often in containers to the Far East).

Speculative market
Which mode of transport is selected depends on the customer. Yntema: “For large volumes, inland shipping is advantageous in terms of costs, but not all customers are situated on or near the water. Moreover, cargo consignments tend to quickly change. Many customers work with tenders which run for one or three years. This means a lot can suddenly change for each lighter. The market is somewhat speculative. There is a lot of trading in commodities, resulting in strong fluctuations.”
According to the managing director, the breakbulk market in general is quite stable. “Tariffs do vary, also because of the changing price of oil and the dollar. Volumes are fairly stable due to the fact that there are so many applications which require metal. The end users are the automotive industry, aerospace sector, electronics industry and cable companies. A very diverse group.”
In the future, Yntema particularly foresees expansion in Rotterdam. In Flushing, the company just expanded its warehouse capacity last year in a joint venture with Verbrugge. Volumes in the port of Rotterdam are growing more strongly. Antwerp, the main breakbulk port in Northern Europe, is not that interesting to the Flushing-based company. “Antwerp is definitely not a small player and it is included in our service network. We do have some warehouse space there, but Antwerp traditionally handles a lot of steel which we do not.”
Yntema has seen the breakbulk market change over the years. Especially the increasing containerisation is striking. “I anticipate this increase to continue. It is convenient, especially for small volumes. Expensive metals such as cobalt, nickel and tin can also be better protected in a container. The container is a very direct means of transport which can be delivered right up to the front door. Some shipments are simply not suited for it though. I still find it quite wonderful to receive a traditional ship in the port and watch it being discharged in the old-fashioned way. That is what real port work is all about.”