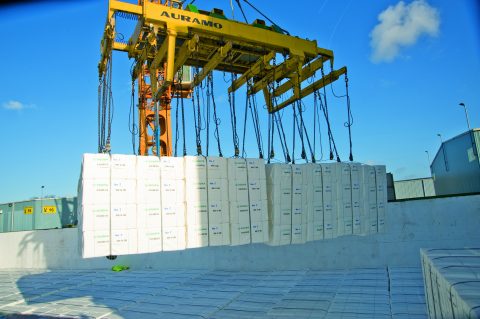 Where other ports have focused on containers over the past decade, the ports of Vlissingen (Flushing) and Terneuzen in the province of Zeeland have concentrated on breakbulk. Clearly a smart move by port landlord Zeeland Seaports given the several new cargo flows this has yielded. Breakbulk now accounts for one-third of the cargo volume.

What makes this growth even more remarkable is the fact that total breakbulk volumes in Northwest Europe have not increased. Vlissingen and Terneuzen have optimally capitalised on their advantages. The location on the open sea, the depth of 16.50 meters, the congestion-free hinterland connections and the specialised terminals make Zeeland Seaports an equally attractive option for shipping lines, stevedoring companies, supplementary (logistics) service providers and shippers.

The growth has occurred in various cargo segments. Several clusters comprising specialised stevedores and supplementary (logistics) service providers have emerged; one example is steel and metals. “We have also strengthened our position in forest products,” says Marcel Pater, sales manager for breakbulk, project cargo and offshore at Zeeland Seaports. “This mainly involves cellulose and paper. And we anticipate growth to continue for these cargo types in the near future as well.”

Scaldiahaven
The growth in breakbulk is no coincidence. “In 2001, Zeeland Seaports started with this policy. In 2007, it received a new impulse with the expansion of the Scaldiahaven port area in Vlissingen. New warehouses have been erected there very rapidly in recent years.”
But facility expansions went hand in hand with cargo growth elsewhere too. Pater for example mentions the Zeeland Terminals of Verbrugge. “Not only for breakbulk but also for project cargo.”
Verbrugge is considered one of the dynamos which, in close cooperation with Zeeland Seaports, has boosted breakbulk activities. “They had the courage to invest in this sector. And their customers were so content with their performance that other shippers followed in their wake.”

Ample Space
The basic conditions of Vlissingen and Terneuzen also played a role in this, says Pater. “The conditions for distribution are good. The hinterland connections by barge, rail and road can easily match those of other ports like Antwerp. But sea shipping lines have shorter sailing distances here. This saves time and fuel, which in turn means more favourable freight rates. And that of course benefits manufacturers. This is why more and more shippers are discovering Zeeland’s ports.”

They are welcomed with open arms. Ample space is still available. For new storage and handling activities pertaining to metals or forest products, but also other types of cargo. Pater: “In total, more than 100 hectares are involved. There is also still space for the construction of 1,000 to 2,000 metres of new quay. The old manufacturing site of Zalco is being redeveloped for offshore project cargo. Many wind farms for the North Sea already pass through Vlissingen and we see opportunities for growth here. The same goes for other offshore projects. Again, the unrestricted accessibility of our ports constitutes a major draw as well.”